One of them, the accountants I worked with, one or another of them always remembered to bring me back one of the giant cookies from the monthly association meeting.  I think they must confer on it before they leave, ‘who’s got the cookies for the office girls?’

It’s sweet.  So is the cookie, which is no lie as big as my face.

Half of it was still on my desk a few hours later, when I noticed an ant crawling towards it.  I’d never seen an ant in this building before.  It’s so clean! and marble! and beige!  I put the little plastic dome of a vending machine toy dispensor over him (yes, I carry these in my purse) but I wasn’t sure where to take him.  If his family was in our office – or anywhere on our floor – they were hella sneaky.  The only place I was certain an ant could live was downstairs, one floor and out to the parking lot, but that was too far to assume he’d come from there.  Last time I tried to move an office spider out to the parking lot he was too scared of the outdoors and ran directly under my foot.  Trying doesn’t always work, yo.

My boss surpressed the second blink when I told her where I was going, trying to pretend she doesn’t think that’s weird.  Bless.  The ant did flips around the inside of the plastic bubble while we waited for the elevator.  Was it really better than just squishing him, to exile him to the land of rival ant gangs?  Were there little ant friends somewhere that would miss him?  Yes, I do think about these things.  Yes, I do care.  I’m careful even with very small life.

An ant is a social creature.  It might not miss it’s mama, per se, but it sure can express agitation at a survival problem when presented with an unfamiliar terrain.  And it did, up and down that concrete curb.  So I did a very sentimental, shortsighted (but if that’s not human what is?) thing.

I left it the other half of the cookie. 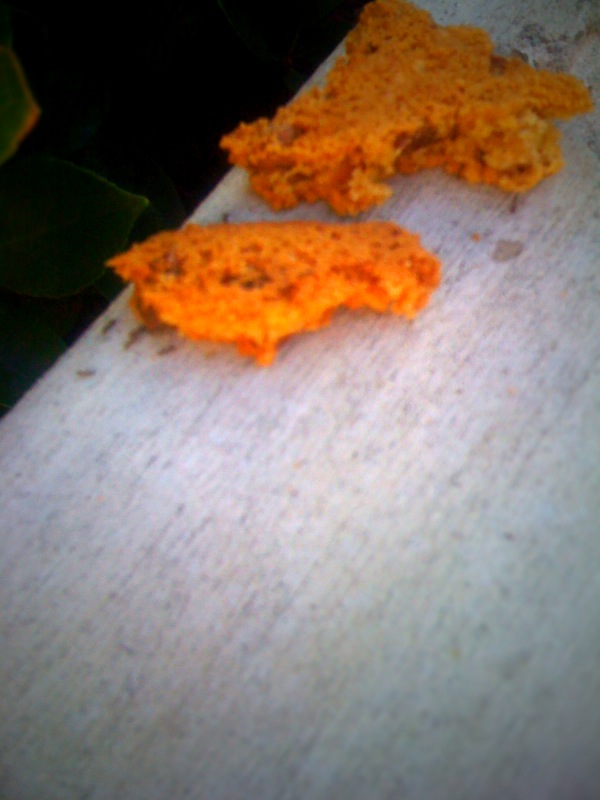 They say traveling will really teach you a lot about yourself.  So far I’m learned that going 60 hours with no sleep and adding two cocktails to the mix will create a very interesting VJ.

Other things I’ve learned include:

87% of this planet’s attractive men are currently in the Brussels airport right now.  In a suit.  Just standing around.  I had to sprint through to make my connection, and I’ve never wanted to stay and improve international relations anyplace more.

60% of those men appear to have been on their way to Copenhagen.  I think I’m going to like it here.

So I was out with my friend Alex.  Have I ever mentioned my friend Alex?  Nice guy.  I met him at Sole Luna restaurant where I pretended to be deaf and he pretended to be single but we eventually sorted it out after two weeks of him thinking I was the best lip reader ever.  Despite all that, we’ve drifted into a friendship where he brings me wine (he’s in the business) and books, and I bring him …….. joy?  I dunno.

That’s Alex.  He’s 42 and looks quite appropriately, 42.  I on the other hand, due to my puppy-like manners and large collection of headbands, often fool the casual observer into thinking I’m younger than my 29 years.

So there we were, walking into a bar in Del Mar, and a couple of guys also entering the bar hold the door open for us.  Pleasantries are exchanged and we take a seat a table next to them at the bar.

Later, something perks my ears and I look up from my Japanese whiskey.  I hear one of the guys say “for every year age difference you gotta figure at least another thirty grand a year he must be making, and he’s got twenty years on her so ….”  As I look up at the speaker, he looks mortified.

They cleared out shortly after, and when we tried to pay our bill we were informed that our “friends” had taken care of the whole thing.  Alex was confused so I filled him in on what they’d noticed me overhear.

“I hope they didn’t offend you,” he said.

There’s this place called Iris, about a mile away from my house.  I’d been there before with Jesse and Bethany, and now I go there a lot, because I like the food, and because it’s close, and because I am precisely the sort of person who gets in a total rut is loyal.

Last night I told our waiter that he’d spoiled me on my birthday, and I would now expect all my deserts with a candle and singing.  He insisted he shouldn’t sing, but was there a song I’d like to hear played?  Something romantic, I said.  Sentimental.

So when he returned with my candlelit pudding, BoysIIMen was singing over the speakers.  Now that’s service.

When I lost my insurance, my therapist slashed her rates over 50%, and started throwing in snacks.

….is basically a salad, right? And corn chips are a vegetable? Wine is fruit juice. Getting five servings is easy!

…. is that I ate the entire stuffed pepper before I realized I was allergic to it.  I had just assumed that Hungarian peppers were supposed to taste like getting punched in the face.

I figured it out when my nose went numb and started to bleed. 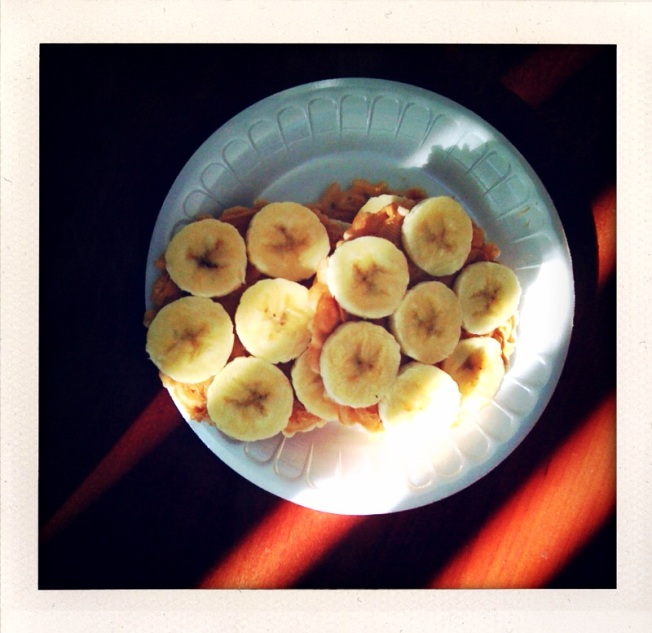 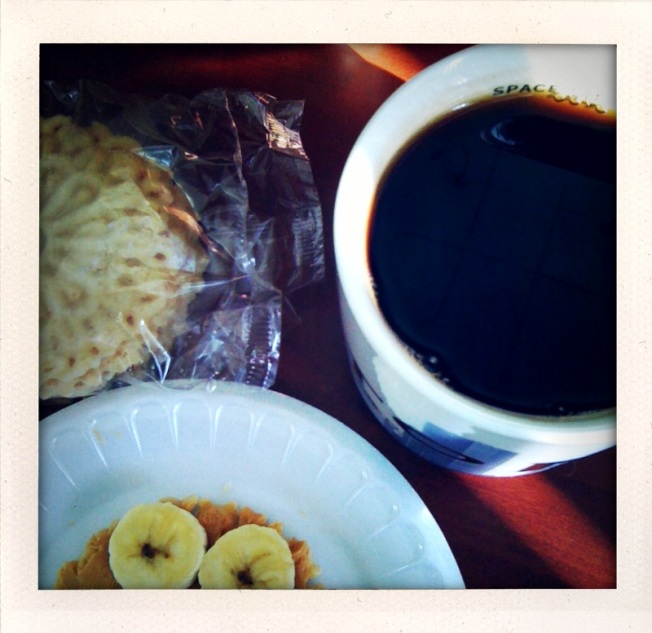 So much going on that I can’t control, but hey at least I can eat a tasty breakfast.  Vanilla waffle cookies (only 23 calories apiece), peanut butter and banana.