When my friend Ezra first announced that they were going to make a movie about him, I immediately had questions.  A naked movie?  Please?  Could I play his dog Putney?

A few months later, Ezra e-troduced me to the producer, David Oliver Cohen, who asked if I could meet him in LA to film an interview.  I’d be playing myself (but maybe Putney too, if she needed a stunt double) (HE REALLY SAID THAT) (which made me totally love him instantly), and talking about two of my most favoritest things, Ezra and the wonderful support system a person can find here on the interwebbies.

A subject I am waaaaaaaaaaay qualified to speak on.  *shy wave*

So I bought another of those train tickets, put on a dress that didn’t come from a clearence sale at a circus costume tent (for once) and even brushed my hair.

Oh and I googled the producer, to find out if this was gonna be a naked movie or not.  So I’d know whether to shave or not. 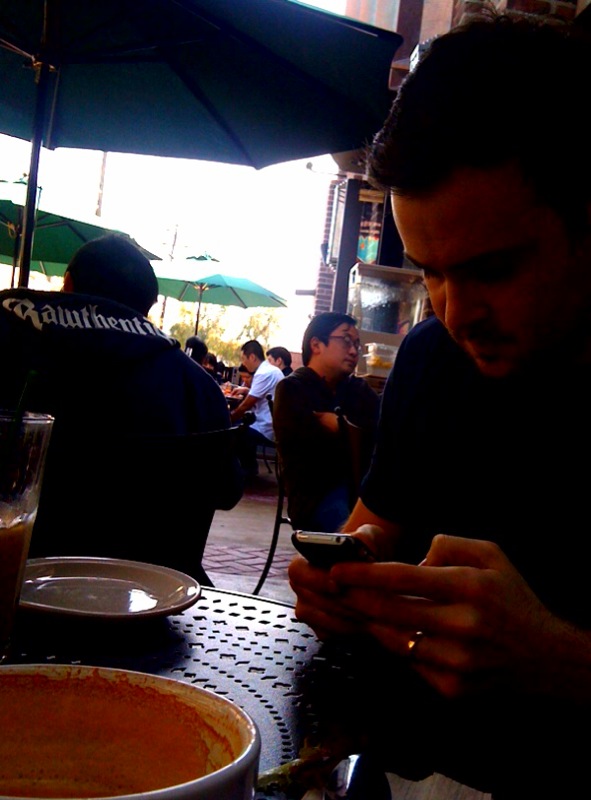 He’s totally nice.  And prolly not thrilled that the only picture I took of him was the one minute he paused to check his phone.  He’s not really one of those sort of people who are trying to look more important, he just actually happens to be.  Right there?  He’s checking in with the owner of the loft we would be filming in.  Which happened to be awesome and not just because a dog named Barney was there to do my hair and makeup.  But partly.

Right before filming, he pulled out a couple sheets of paper.  They were his FILE. ON. ME.  No one has ever had a file on me before.  (Well ….)  His notes were  even color coded.  Watching him consult them was like foreplay for me, I had to remind me that this was just the 9-5 daily grind for him. 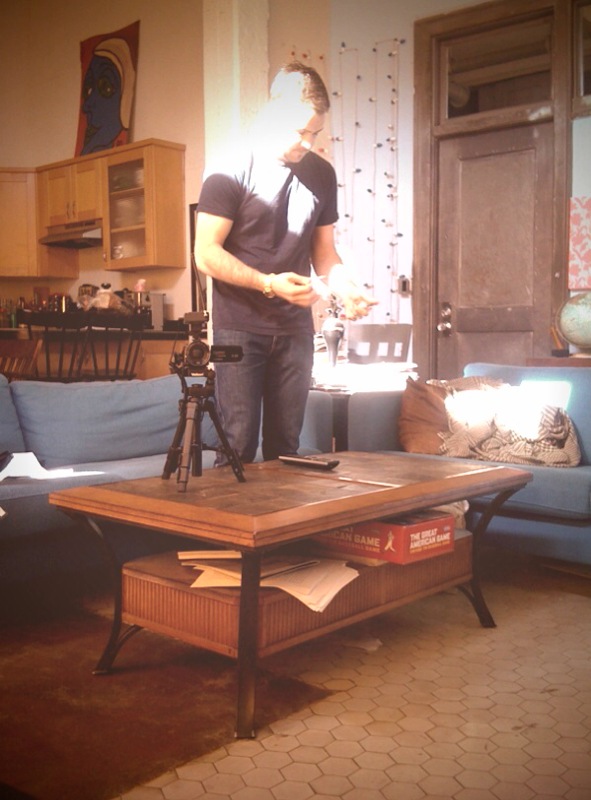 *sigh*  I could get used to this, and y’all saying you knew me when ….

As some of you might know, my actual birthday falls on December 23rd, which is a ridiculous time of year to have a birthday.  (You heard me, Jesus.)  So I’ve done the sensible thing and rescheduled.  This year it fell on Sept 25th.  What day it falls on is subject entirely to my whim.

As you can see, I picked a good day. 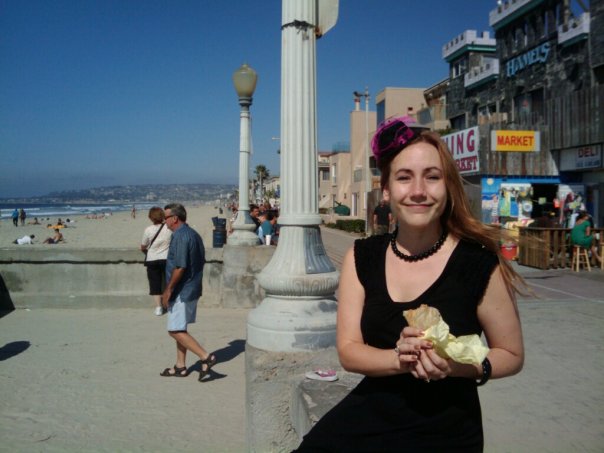 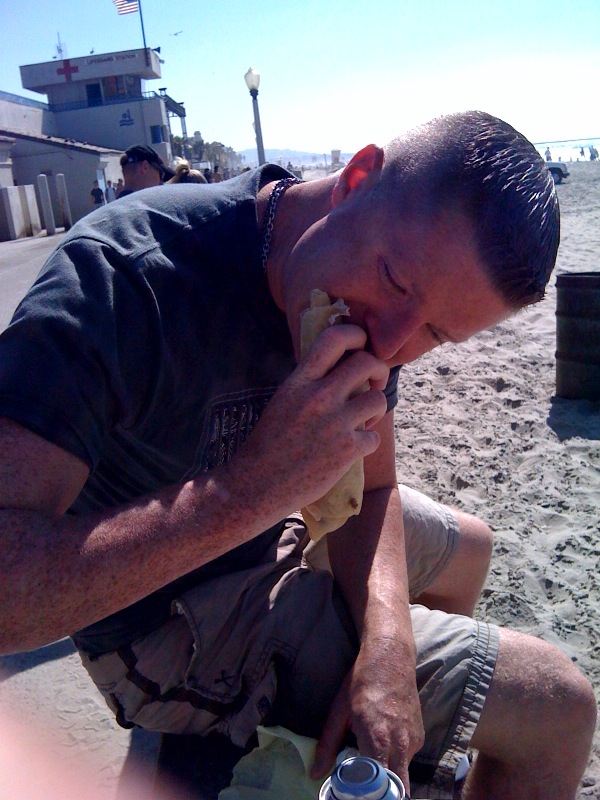 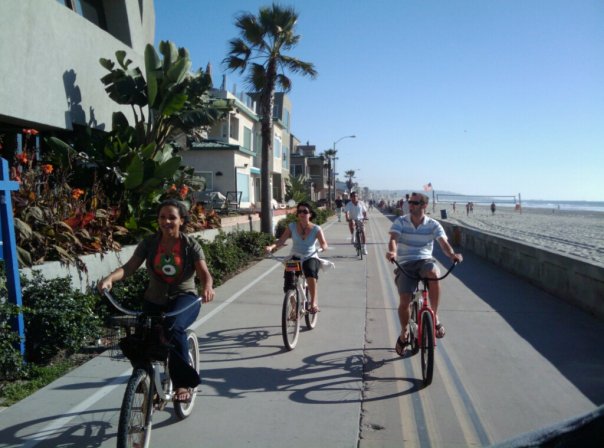 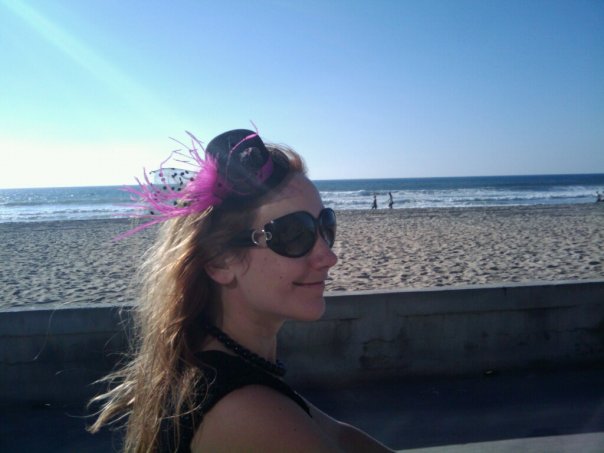 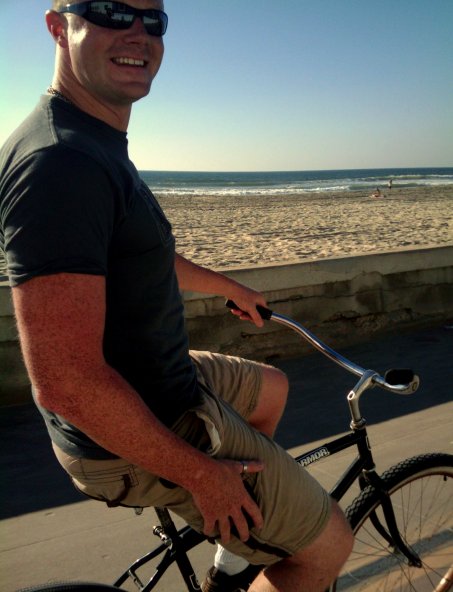 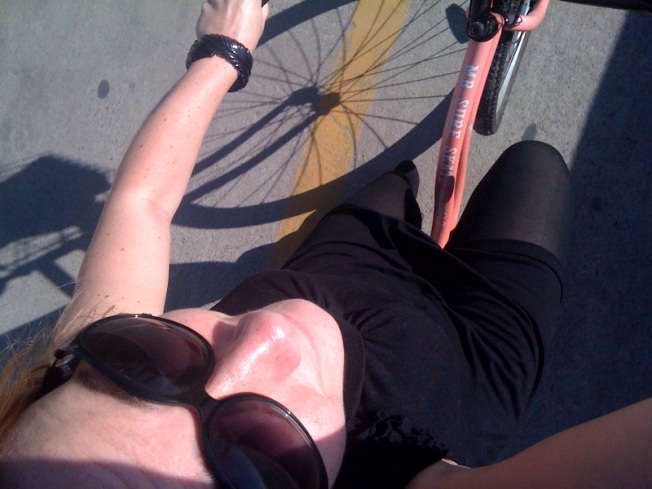 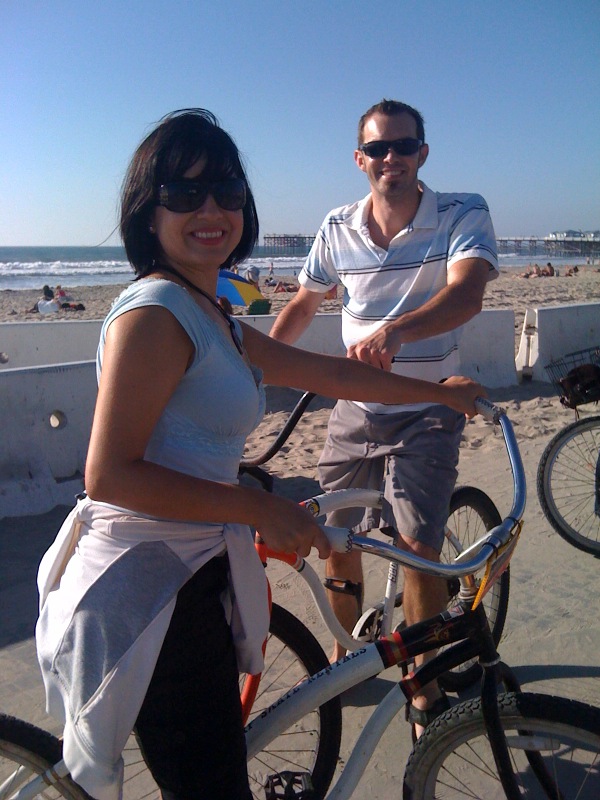 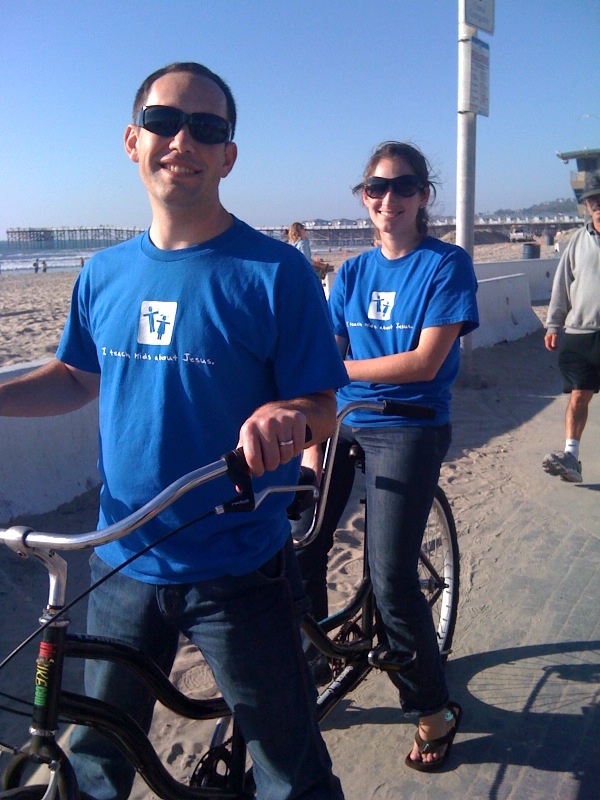 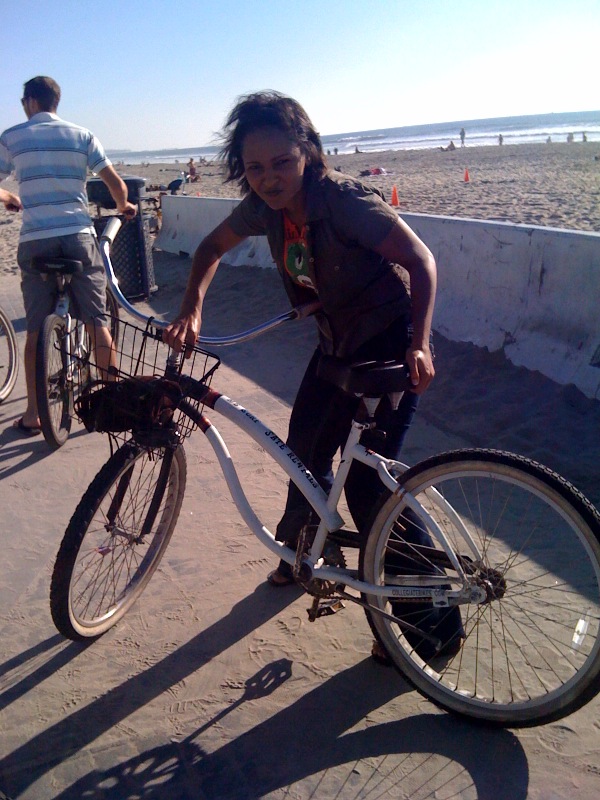 I wouldn’t take any of it back, you know.

I mean, sure, I lost a dog, some nights of sleep and all the power tools.

But I gained streamers on my bike handles, a confidence in my own voice, and the reminder that our lives really are what we make them.  Oh, and a friend, too.

Nothing very bad can happen to you when you live with people you love, and that includes breakups.

There’s one thing I want to say

So I’ll be brave

You were what I wanted

I gave what I gave

I’m not sorry I met you

I’m not sorry it’s over

I’m not sorry there’s nothing to say

There’s nothing to say.

The thing about Knickers is that it’s virtually impossible to be around him and not learn about bicycles.  Before I met Knickers, if you were to ask me what sort of bike I had, I’d have told you, “red.”  (Now, I’d say, “which one?”)  I know my headsets from my bottom brackets, my track bikes from my road bikes from my downhill bikes to my commuter bikes, and the real reason cyclists shave their legs.

Repeat that until you’ve got it down.

Ok, so moving on.

A couple of weekends ago, Knickers and I went to the estate sale of a man who used to own a bike store.  It was run by his sister, who as I looked through a collection of old jewelry, told Knickers there was one more old bike inside.

I walked in behind Knickers, just in time to watch him almost have a heart attack.

In the hallways was a pre war schwinn track bike.  With wooden rims and everything.

Knickers told me later if she’d asked a price that he could afford, he would have bought it, and not told her what it was really worth, but I know him too well.  He’s too honest for that.

He asked her what she was asking for it, and she said rather proudly, “I’ve been offered up to fifteen hundred for it, and they said to let them know if anyone offered me more.”

Knickers laughed and said, “I bet they did.”  He went on to tell her to times that number by ten or twenty, or donate it to a museum, because this wasn’t just the most valuable bike he expected to lay his eyes on, but the rarest.

He said that since he couldn’t afford fifteen hundred, he was ruining it for everyone else out of spite.  But I know him better than that.

The woman seemed touched, since she’d thought she could trust the people who’d offered her fifteen hundred or to top her best offer, and here a perfect stranger was helping her not get ripped off.

She wouldn’t take money for the necklace I wanted.  And it’s one of my favorites now.  It’s a mood pendant, with a little capricorn goat.  I could really care less about my sign, but hello, goats are cute!  It’s red when my skin is cold, and green when I’m warm.

And most of all, it reminds me of all the lovely things that can only happen when you surround yourself with lovely people. 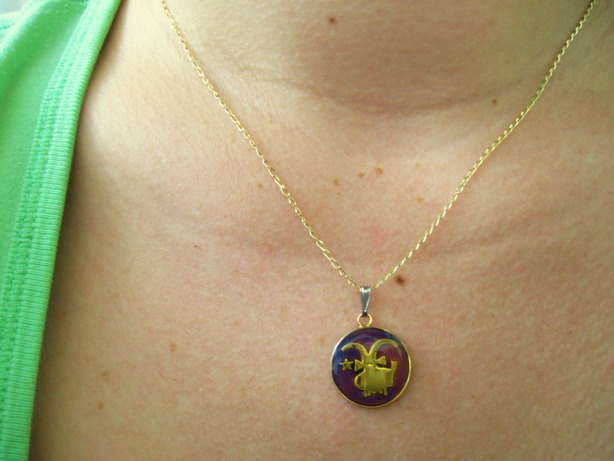 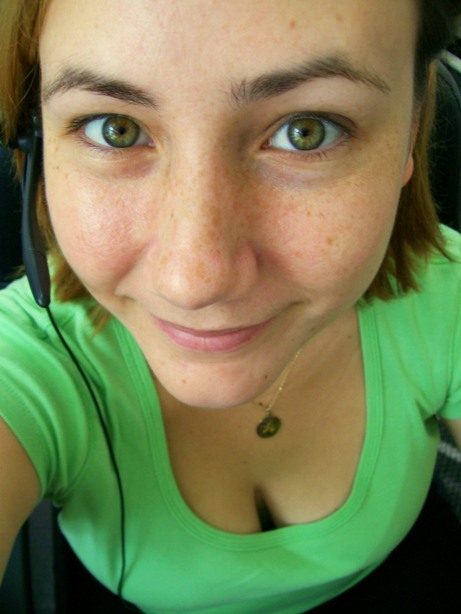 (sung to the tune of Proud Mary)

It wouldda been a good day for it, I’ll admit that.

In fact it was the weather that I commented on to him when he pulled up next to me at the stoplight, on his prettyshiny orange motorcycle.  It really was a beautiful day for a ride.

Talking at 50 mph through my window, he proceeded to tell me I should park my car and hop on and ride off with him or give him my number or marry him.

And I laughed and said “my old man wouldn’t like that much,” but the truth is that really, despite his age being somewhere around 50, he was too young for me, I’ve outgrown the desire to run off with just anybody and I don’t need somebody to drive.

I took the long way home.

Luca cheers him on!

The following is proof that I don’t spend EVERY evening drinking a Tom Collins and crocheting in front of the TV.  (That was just Friday night.)  (I am such an old woman at heart.)

Saturday, I took Rudolf to Balboa Park for a picnic of apples and carrots and cilantro.  He washed that down with some grass, a piece of bark, and a leaf I couldn’t identify.  I washed it down with water.  Rudolf chased a butterfly (so cute it almost broke my heart) and we listened to a mariachi singer, who’s outfit perfectly matched the butterfly’s colors.

Rudolf cleaned himself up after we ate.  I mean, we were in public, and he’s a very mannerly little bunny.

We made new friends, especially a boy named Marcus and a little girl named Camile.  We soaked up the sunshine and spring breezes, and the sounds of a nearby Shakespeare festival.  (Rudolf is a fan of A Midsummer Nights’ Dream, just like me.)

Then, we had a bit of an adventure.  Rudolf got his leash wrapped around his little back leg, and it really freaked him out.  Have you ever seen a bunny freak out?  They try to jump in every direction at the same instant.  It’s an explosion of legs and ears and fur.  In doing so, he was successful in getting the leash off from around his leg.

And the entire harness off.

See, it’s not that I think Rudolf wants to run away from me.  He and I get along because I don’t press my affections on him, I let him come to me, when he wants attention.  I don’t pick him up, I wait for him to come to me, and hop in my lap.  And because of that trust, he DOES hop in my lap.  The harness wasn’t to trap him, I was happy to wander with him in any direction he wanted to go.  It was to keep him from, in the event of such a freakout, running so far away that he would get lost, or running straight into the jaws of a dog, because his only experience with them is Luca the cuddle monster.  Really, since he was leading me around, and I was using it to make sure I could tag along and keep him safe, you might say that in spirit, I was wearing a leash.

So as Rudolf and I sat on the lawn, contemplating each other, and spectators gathered, I thought to myself, “I hope he WANTS to come home with me.”

I held out some lettuce and scooted closer, trying not to show with my body language that I was poised with my purse in my other hand.   I would have preferred to let him hop in of his own accord, but it would only take one loose dog to put him in danger.

I sidled up to him and pet him gently on the nose, then, as quick and gentle as I could, scooped him into my purse.  I then picked up the picnic pack and walked quickly back to the car.

As I left that lawn in the park, and passed some horrified faces, it occurred to me what that scene must have looked like to the people strolling by, who stopped only after Rudolf got loose.

They must have seen a wild rabbit on the lawn, and a Bunny Whisperer creeping up.  They would have seen a girl creep up, steal a rabbit, shove it in her purse and run off with a picnic basket.

No wonder they looked horrified.

I chuckled about that all the way home.

That afternoon and evening, as Nick and I did all that soul searching and crying and talking, I channeled all my inner turmoil into power-snuggling with Nick, and power-crocheting.  Once the scarf measured over six yards long, it occurred to me to stop.  And add some fringe.

The next morning, Sunday, Nick and Luca and I went to the El Cajon Grand Prix bike race.

The thing about cycling is that you’d think all that spandex would make it easier to tell the men from the women, but somehow it ………… doesn’t.

We watched several races, drank coffee and got a bit tanner.

I wandered over to the man made mini-lake next to the courthouse, and fed the ducks some stale girl scout cookies.  I keep that sort of thing with me at all times, for just such a opportunity.

And when we went home, and I thought about not living with my favorite person in the world anymore, and started to cry, I reached for the crazy-scarf I’d crocheted to wipe my eyes.  And Nick and I laughed about how when he moves out, he’ll take one end of it, and I’ll keep the other, and like our relationship, it’ll be long enough and strong enough that we’ll be able to tug on it, when we need the other.